Case of the Month

After 3 doses of combined immunotherapy with the immune checkpoint inhibitors (ICI) ipilimumab and nivolumab, the patient presented with a burning sensation and swelling in the left eye. The ophthalmological emergency service suspected conjunctivitis, so corticoid-containing eye drops and eye ointment were used, but the swelling continued to increase. An ophthalmological examination revealed impaired ocular motility, so a cerebral MRI was performed, which revealed inflammatory changes (swelling, edema and contrast uptake) in the left lateral rectus muscle and an exophthalmos. An ipilimumab/nivolumab-induced myositis of the lateral rectus muscle was diagnosed. The creatine kinase (CK) was in the normal range. 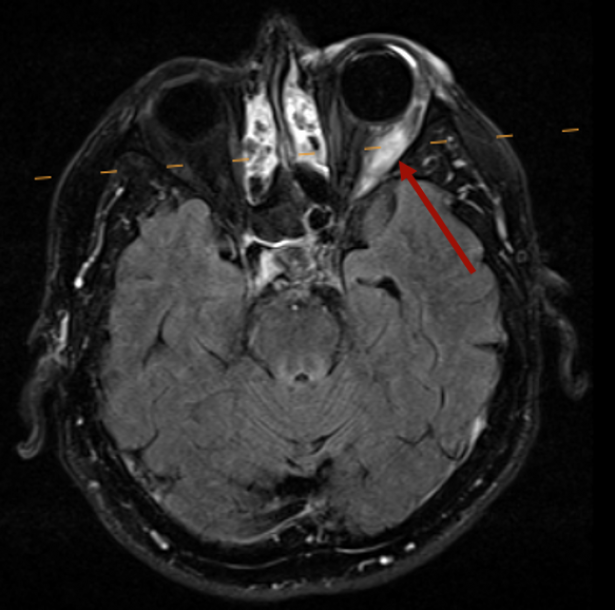 We initiated a systemic therapy with prednisolone with an initial dose of 2 mg/kg, which was soon reduced to 1 mg/kg and then tapered off. Just two days after the start of the prednisolone treatment, the swelling had completely subsided; ocular motility also returned to normal over time. After tapering off the prednisolone to 10 mg, irColitis developed, which had to be treated with infliximab due to a steroid-refractory course.

Up to now, staging has shown stable disease, therefore immunotherapy was not reinduced due to the potential exacerbation of the steroid-refractory colitis. If necessary, reinduction should be carefully evaluated.

Myositis is a rare side effect of immunotherapy, occurring in <1% of patients and potentially fatal. An overlap with myocarditis and mysthenia gravis-like symptoms has been described. Diagnostic clues are provided by symptoms (muscle weakness, myalgia), increased CK, a myopathic pattern on electromyography, contrast uptake on MRI, and inflammatory or necrotic changes on muscle biopsy. Antibodies are mostly negative. Usually, immunotherapy should be interrupted or discontinued and systemic corticosteroid therapy (1-2 mg/kg) initiated. If therapy is refractory, plasmapheresis or IVIG, infliximab, MMF, MTX, or azathioprine can be initiated (Moreira et al., Eur J Cancer, 2019; Moslehi et al., Lancet, 2018; Kostine et al., Ann Rheum Dis, 2021).

Interestingly, in contrast to our case, three published cases of ocular myositis showed CK elevation (between 1844 and 7765 U/L), possibly due to involvement of other muscles. The 3 cases were treated with corticosteroids; in 1/3 of the cases the anti-PM-Scl 75 antibodies and anti-SRP antibodies were positive and plasmapheresis was also performed. In all three cases, the symptoms improved or resolved (Garibaldi et al., Neuromuscular Disorders, 2020; Kamo et al., BMC Neurology, 2019).

In the differential diagnosis, ocular irAE (e.g. conjunctivitis, secleritis or unveitis) also had to be considered initially. Ocular irAE occur in approximately 1% of patients receiving ICI therapy and non-muscular ocular irAE can often be treated topically, so interruption of ICI therapy may not be required.

Ocular myositis is a rare side effect of immune checkpoint inhibitors that physicians should be aware of and that requires ICI therapy interruption and systemic corticosteroids.

After 1 month of adjuvant therapy with nivolumab, the patient presented with fever, myalgia without CK elevation, arthralgia and elevated inflammatory parameters. Due to a suspected systemic inflammatory reaction, most likely due to the immunotherapy, the nivolumab therapy was paused and the patient received methylprednisolone 1 mg/kg bw with subsequent taper. Shortly after resuming immunotherapy, the patient presented again with elevated inflammatory parameters, a hyperinflammatory syndrome was suspected, but the patient also described stabbing pains in his left eyebrow and ear. Nivolumab was re-initiated again, and shortly thereafter the patient complained of recurrent amaurosis fugax in the right eye. Duplex sonography showed the typical findings of a giant cell arteritis of the temporal artery. We initiated a therapy with prednisolone 1 mg/kg bw.

In summary, the patient showed laboratory signs of inflammation, fever, myalgia and arthralgia, temporal headaches and recurrent amaurosis fugax. In retrospect, the initial myalgia may be interpreted as a sign of polymyalgia rheumatica, and the stabbing pain in eyebrow and ear as a sign of arteritis temporalis.

We initiated therapy with prednisolone 1 mg/kg bw. The additional administration of tocilizumab is planned. To date, the patient has shown no recurrence of the melanoma.

A continuation of immunotherapy may be discussed after a detailed benefit-risk assessment but is currently not planned.

GCA is a rare side effect of immunotherapy. An analysis of VigiBase revealed 18 cases of temporal GCA, 55% of the cases occurred after anti-CTLA4 therapy and one third of the cases were accompanied by visual impairment or blindness (Salem et al, Lancet Oncol., 2018). Two case reports described GCA under anti-PD1 therapy (Narala et al., Am J Ophthalmol Case Rep., 2020; Betrains et al., J Clin Rheumatol., 2021); in both cases, immunotherapy was discontinued and the patients treated with steroids. Therapy of ICI-induced GCA may also include methotrexate or tocilizumab (Heinzerling et al., Dtsch Arztebl., 2019). Evidence supports an important role of PD-1 and CTLA-4 pathways in the pathophysiology of vasculitis (Zhang et al., Proc Natl Acad Sci, 2017).

Giant cell arteritis is a rare side effect of immune checkpoint inhibitors that physicians should be aware of. In the case of typical systemic symptoms, headaches or vision disturbances, a low-threshold GCA clarification should be carried out.

After 9 months (and 19 doses) of immunotherapy with the anti-PD1 antibody durvalumab 10 mg/kg bw every 2 weeks, the patient developed a “rash”. Initially, the immunotherapy was discontinued and the patient treated with topical steroids and systemic prednisolone 60 mg p.o. for 10 days, which led to an initial improvement of the skin condition. While tapering the steroids, there was another exacerbation and 150 mg prednisolone i.v. were administered. Since there was no improvement under this therapy, the patient was referred to the department of Dermatology.

The patient presented with erythema and erythematous plaques covering approximately 18% of the body surface area, predominantly on the distal extremities. There was also lamellar desquamation and blistering, particularly on the hands. Histology showed vesicular detachment at the level of the basement membrane zone, a perivascular lymphocytic infiltrate, single-cell apoptosis and single eosinophils. The fluorescence pattern was non-specific. In summary, the findings corresponded to an erythema multiforme (EM)-like drug reaction. 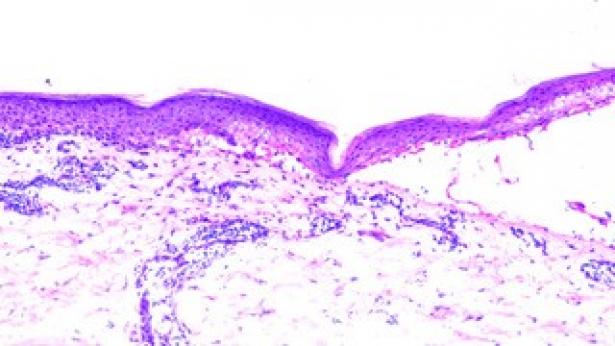 The dose of corticosteroids was increased to 250 mg prednisolone i.v. for 3 days and then reduced to 80 mg p.o. The steroids were then tapered very slowly, but had to be increased again twice. In parallel, topical therapy with mometason cream was carried out. Due to the steroid-refractory or steroid-dependent course, secondline immunosuppression (therapy with intravenous immunoglobulins (IVIG) as well as extracorporal photophereses) was discussed.

Four months after the onset of the erythema multiforme, currently, a cortisone dose of 30 mg is required. Secondline immunosuppression was not started and the checkpoint inhibitor therapy was not yet re-initiated.

Cutaneous irAEs are often mild but can be severe, requiring discontinuation of immunotherapy and initiation of systemic therapy. Dermatologists should be involved in managing cutaneous side effects, since specific skin findings may require varying treatments.

After three doses of combination immunotherapy with ipilimumab 3 mg/kg bw and nivolumab 1 mg/kg bw, the patient developed visual impairment due to iritis that was treated topically with cortisone eye drops. Shortly thereafter, the patient reported dizziness, tinnitus, hearing impairment and balance disorder. An ENT examination showed caloric near-areflexia on both sides and a videooculographically pathological Halmagyi head impulse test. The ability to hear in the high-frequency range was limited in the audiogram. A bilateral vestibulopathy was diagnosed.

The patient received three bilateral intratympanic cortisone injections. The imbalance disorder improved significantly on the right and slightly on the left. The hearing ability in the high-frequency range improved. Subjectively, the patient also reported a significant improvement in gait and mobility stability.

After the patient’s general condition improved, we continued immunotherapy with nivolumab monotherapy. There was no exacerbation of the vestibulopathy, but the patient developed irColitis and also Uveitis and Vitiligo, suggesting Vogt-Koyanagi-Harada disease. With regard to the melanoma, the course of the disease remained stable.

Vestibulopathies are rare immune-mediated side effects and have been described with various immunotherapies (nivolumab, ipilimumab+nivolumab, ipilimumab and pembrolizumab). Both with and without therapy, patients often show little or no improvement in vestibular symptoms (Voskens et al., J Clin Oncol, 2012; Mendis et al. Eur J Canc, 2021; Lemasson et al., Eur J Canc, 2019; Koch et al., J Immuother, 2021; Stürmer et al., J Immunother, 2021). Intratympanical cortisone application is an alternative to systemic cortisone administration (Salt et al., Drug Discov Today, 2005). A correlation between the time from the onset of vestibulopathy to the start of therapy and the response is probable. Therefore, physicians should be aware of immune-mediated vestibulopathy and conduct a prompt ENT consultation in suspected cases.